LOX or lysyl oxidase is also known as protein-lysine 6-oxidase, a human protein encoded by the LOX gene. The inhibition of LOX can cause osteolathyrism. When LOX is upregulated by tumor cells, it may promote metastasis of the existing tumor that cause it to become malignant and cancerous. 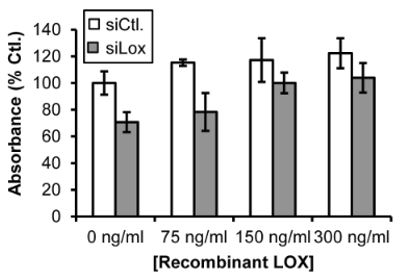 Knocking down of LOX protein caused a reduction in the number of viable cells., which can be rescued by OriGene LOX protein (SKU# TP313323). Figure cited from EMBO Mol Med 2015