What is CRISPRa and CRISPRi?

To modulate gene regulation, gRNA is usually designed to target around the promoter region, and the transcriptional start site (TSS) (+1)

CRISPRa SAM is a robust CRISPR gene activation system to activate gene expression using CRISPR technology. The CRISPRa SAM consists of dCas9-VP64, a modified gRNA containing MS2 RNA aptamers, and MS2-p65-HSF1 activation domains. VP64 has four copies of VP16, a viral protein that is used for transcriptional activation. p65 and HSF1 are transcription activation domains. When p65 and HSF1 are brought in close proximity to dCAs9-VP64 via interaction of MS2 with MS2 RNA aptamers in gRNA, the three transactivators can synergistically upregulate gene expression. CRISPRa SAM system can robustly activate both coding and non-coding RNA (lincRNA). 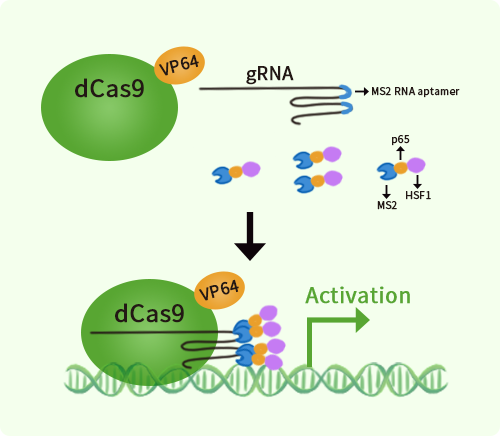 The all-in-one CRISPRa vectors contain both gRNA cloning sites under U6 promoter, and a CMV driven dCas9-VP64 expression cassette. After cloning specific gRNA sequence, the vector can express dCas9-VP64 fusion protein and gRNA with a MS2 binding sequence. Normally the gRNA sequence used in our CRISPRa system is designed based on the promoter sequence of the target gene.

pCRISPRa-Enhancer vector encodes a fusion protein of MS2 coat protein and the transactivation domains of p65 and HSF1. MS2 protein will bind to MS2 RNA aptamer in the gRNA, thus bringing p65 and HSF1 together with dCas9-VP64.

CRISPRa SAM can be used for the up-regulation of gene expression. OriGene offers genome-wide locus specific gene activation kit using CRISPRa SAM system. The specific gRNA is designed to target the promoter region of the gene. It can bring dCas9-VP64 fusion protein to the specific locus, and activate the expression of the target gene.
Each CRISPRa kit contains an enhancer vector, which express a fusion protein of the P65 and HSF1 transactivation domains. The enhancer protein can be recruited to the target gene through the binding of the MS2 sequence in the gRNA loop and enhancer protein, therefore robustly activate gene expression. 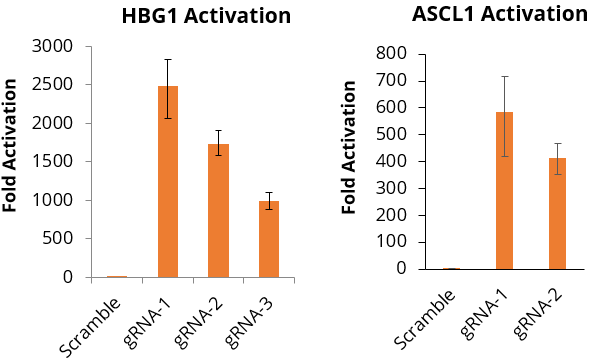 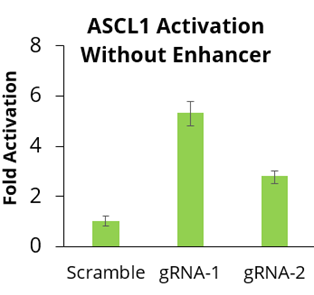 
In this CRISPRi system, dCas9 is fused with KRAB and MeCP2 repression domains to carry out robust gene repression. Krüppel-associated box (KRAB) is a well-known transcriptional repressor domain. MeCP2 has been shown to bind to methylated DNA. 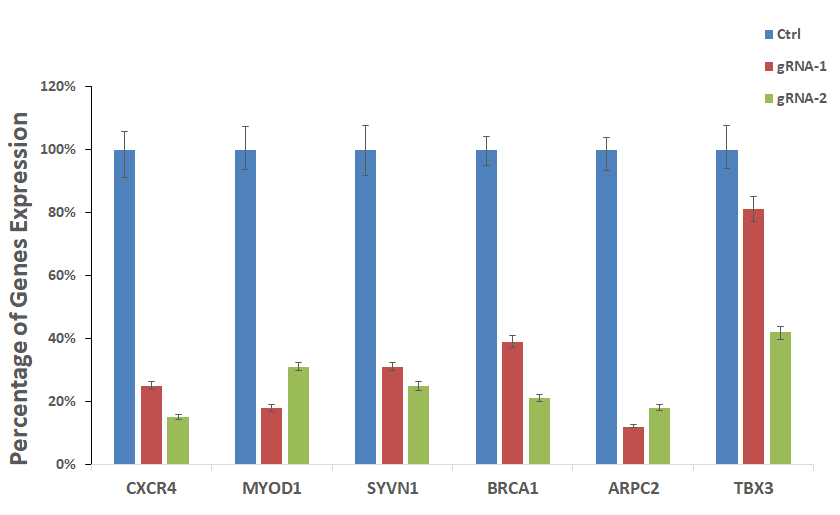 Gene expression repression was significant across all genes tested as shown above.