What are Inducible Expression Vectors?

Inducible Expression Vector help you in gene manipulation, this is done by spatial-temporally controlling gene expression especially in mammalian cell. This system is adopted from bacteria which are tetracycline resistant.

OriGene's All-in-one Tet-ON system is a new and improved version of the original Tet-ON systems designed to significantly stimulate expression of the downstream gene of interest (GOI). It has a Tet-On 3G transactivator and a tightly regulated TRE promoter (PTIGHT) in one vector.

Significant induction of GFP expression was observed in HEK 293 cells transfected with Tet-On vector at Dox dosage of 1ug/ml or higher, 72 hours post treatment, as shown in the microscopic images. Concomitantly, we performed a quantitative measurement of the induction of the GFP expression by Dox on the same cells using a fluorescence plate reader at 0, 24, 48, and 72 hours post Dox treatment.

Raw fluorescence intensity readout (expressed in arbitrary units) from the plate reader plotted against varying concentrations of Dox within their respective days clearly demonstrates the most effective dosage to be at 1ug/ml or higher which reflects the observation seen in the microscopic images.

A 96 well plate fluorescence reader was used to assess the induction of the Tet-ON system by Dox by measuring the GFP expression at 0, 24, 48, and 72 hours post induction. Cells were treated with 0, 0.01 0.1, 1, 10 (ug/ml) of Dox. GFP intensity readout from the plate reader was plotted on the y-axis (arbitrary units, a.u.) against cells treated with varying concentration of Dox on the x-axis at different time points. Maximal induction of our Tet-ON system (PS100125) was observed at 72 hours post Dox treatment for all doses of Dox whereas virtually none was quantified in cells that was not induced by the Dox 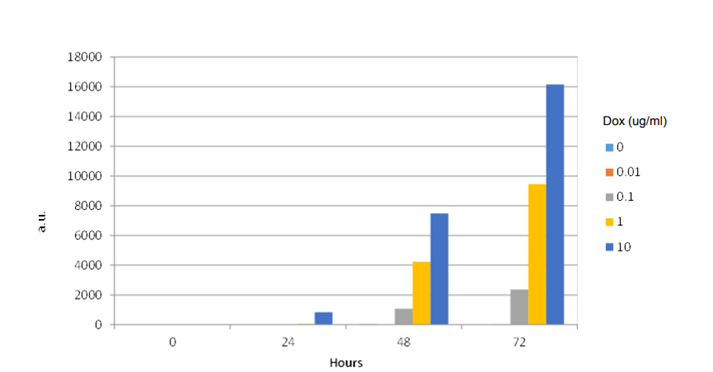