Beta-Tubulin is a subunit of tubulin. Tubulin is one of several members of a small family of globular proteins. It is the major constituent of microtubules. There are two of most common members of the tubulin family: alpha-tubulin and beta-tubulin, and together their dimers form microtubules. The dimers of alpha- and beta-tubulin bind to GTP and assemble onto the (+) ends of microtubules while in the GTP-bound state. After the dimer is incorporated into the microtubule, the molecule of GTP bound to the beta -tubulin subunit eventually hydrolyzes into GDP through inter-dimer contacts along the microtubule protofilament. Beta-tubulin faces the plus end of the microtubule while alpha-tubulin faces the minus end. Dimers bound to GTP tend to assemble into microtubules, while dimers bound to GDP tend to fall apart. 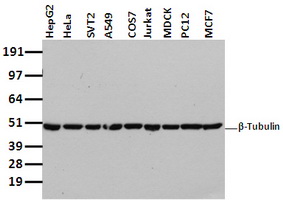 Tubulin protein is one of several members of a small family of globular proteins. The tubulin proteins make up microtubules. Acetylation occurs as a co-translational and post-translational modification of proteins, such as acetylated tubulin proteins. The regulation of tubulin protein is an example of this in mouse neurons and astroglia. A tubulin acetyltransferase is located in the axoneme, and acetylates the alpha-tubulin subunit in an assembled microtubule. Once disassembled, this acetylation is removed by another specific deacetylase in the cell cytosol. Thus axonemal microtubules, which have a long half-life, carry a "signature acetylation" which is absent from cytosolic microtubules which have a shorter half-life.

Each beta tubulin and alpha tubulin has a molecular weight of approximately 50 kiloDaltons. These subunits are slightly acidic with an isoelectric point between 5.2 and 5.8.

The alpha beta tubulin heterodimer is the structural subunit of microtubules, which are cytoskeletal elements that are essential for intracellular transport and cell division in all eukaryotes. Each tubulin monomer binds a guanine nucleotide, which is nonexchangeable when it is bound in the alpha subunit, or N site, and exchangeable when bound in the beta subunit, or E site. The alpha- and beta-tubulins share 40% amino-acid sequence identity, both exist in several isotype forms, and both undergo a variety of posttranslational modifications. Limited sequence homology has been found with the proteins FtsZ and Misato, which are involved in cell division in bacteria and Drosophila, respectively. Here we present an atomic model of the alphabeta tubulin dimer fitted to a 3.7-A density map obtained by electron crystallography of zinc-induced tubulin sheets. The structures of alpha- and beta-tubulin are basically identical: each monomer is formed by a core of two beta-sheets surrounded by alpha-helices. The monomer structure is very compact, but can be divided into three functional domains: the amino-terminal domain containing the nucleotide-binding region, an intermediate domain containing the Taxol-binding site, and the carboxy-terminal domain, which probably constitutes the binding surface for motor proteins.