GAPDH, a multifunctional protein, not only catalyzes the oxidative phosphorylation of glyceraldehyde-3-phosphate during glycolysis, but also regulates multiple cellular functions including membrane fusion, transport, apoptosis, DNA replication and repair, and regulation of transcription and translation. These functions are essential for basic cell function, so GAPDH expression is stable and ubiquitous; thus making it an ideal housekeeping gene. Like beta-actin, GAPDH is a commonly used loading control in western blots and a positive control in qPCR experiments. Read this paper 'Housekeeping Gene Selection Advisory: GAPDH and Beta-actin'. 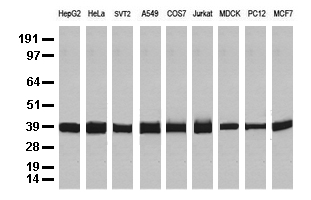 The molecular weight (MW) of GAPDH is approximately 37 kD.

GAPDH gene encodes a member of the glyceraldehyde-3-phosphate dehydrogenase protein family. The encoded protein has been identified as a moonlighting protein based on its ability to perform mechanistically distinct functions. The product of this gene catalyzes an important energy-yielding step in carbohydrate metabolism, the reversible oxidative phosphorylation of glyceraldehyde-3-phosphate in the presence of inorganic phosphate and nicotinamide adenine dinucleotide (NAD). The encoded protein has additionally been identified to have uracil DNA glycosylase activity in the nucleus. Also, this protein contains a peptide that has antimicrobial activity against E. coli, P. aeruginosa, and C. albicans. Studies of a similar protein in mouse have assigned a variety of additional functions including nitrosylation of nuclear proteins, the regulation of mRNA stability, and acting as a transferrin receptor on the cell surface of macrophage. Many pseudogenes similar to this locus are present in the human genome. Alternative splicing results in multiple transcript variants. [provided by RefSeq, Nov 2014]

GAPDH has both glyceraldehyde-3-phosphate dehydrogenase and nitrosylase activities, thereby playing a role in glycolysis and nuclear functions, respectively. Participates in nuclear events including transcription, RNA transport, DNA replication and apoptosis. Nuclear functions are probably due to the nitrosylase activity that mediates cysteine S-nitrosylation of nuclear target proteins such as SIRT1, HDAC2 and PRKDC. Modulates the organization and assembly of the cytoskeleton. Facilitates the CHP1-dependent microtubule and membrane associations through its ability to stimulate the binding of CHP1 to microtubules (By similarity). Glyceraldehyde-3-phosphate dehydrogenase is a key enzyme in glycolysis that catalyzes the first step of the pathway by converting D-glyceraldehyde 3-phosphate (G3P) into 3-phospho-D-glyceroyl phosphate. Component of the GAIT (gamma interferon-activated inhibitor of translation) complex which mediates interferon-gamma-induced transcript-selective translation inhibition in inflammation processes. Upon interferon-gamma treatment assembles into the GAIT complex which binds to stem loop-containing GAIT elements in the 3' UTR of diverse inflammatory mRNAs (such as ceruplasmin) and suppresses their translation. Catalytic Activity: D-glyceraldehyde 3-phosphate + phosphate + NAD+ = 3-phospho-D-glyceroyl phosphate + NADH.