Beta-actin, also known as a "housekeeping" protein, is usually used as a loading control , for among others, the integrity of cells, protein degradation, in PCR and Western blotting. Loading controls are essential for proper interpretation of western blots. They can be used to normalize the levels of protein detected by confirming that protein loading is the same across the gel. Beta-actin is an isform of actin proteins. Actins are highly conserved proteins that are involved in cell motility, structure, and integrity. There are six different but highly conserved actin isoforms in vertebrates. Four of these isoforms are expressed primarily in striated and smooth muscle cells, whereas beta-actin and gamma-actin isoforms are ubiquitously expressed. Conserved from birds to mammals, beta-actin and gamma-actin differ at only four biochemically similar amino acid residues. These amino acid differences confer different biochemical properties between the two isoforms. Beta-actin is a major constituent of the contractile apparatus. 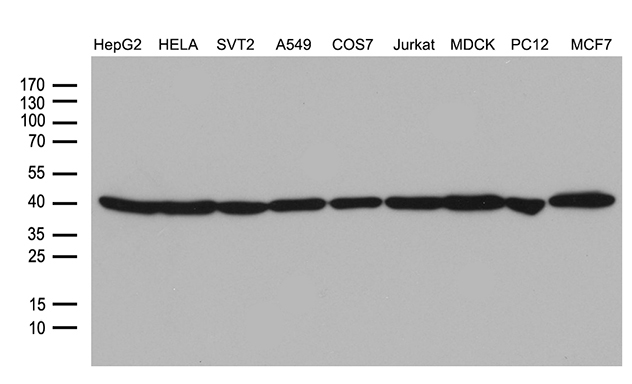 The official symbol of beta-actin gene is ACTB (provided by HGNC). It is also known as BRWS1 or PS1TP5BP1.This gene encodes one of six different actin proteins. Actins are highly conserved proteins that are involved in cell motility, structure, and integrity. This actin is a major constituent of the contractile apparatus and one of the two nonmuscle cytoskeletal actins.

The molecular weight (MW) of beta-actin is approximately 42 kD.

Beta-actin variant is necessary for Enterovirus 71 replication. Enterovirus 71 (EV71) is one of the main etiological agents of the Hand, Foot and Mouth Disease (HFMD) and has been known to cause fatal neurological complications such as herpangina, aseptic meningitis, poliomyelitis-like paralysis and encephalitis. EV71 is endemic in the Asia-Pacific region and causes occasional epidemics.Significant differences have been found in the beta-actin variants between the EV71-susceptible RD cells and EV71-resistant RD cells, suggesting that beta-actin, in association with other proteins such as annexin 2 is required in vesicular transport of EV71.
Recurrent mutations in this gene have been associated to cases of diffuse large B-cell lymphoma. Actins are highly conserved proteins of the cytoskeleton and are involved in B lymphocyte activation. By using the xvar algorithm (based on evolutionary conservation and the nature of the observed amino acid change), the predicted functional consequence of the ACTB mutations observed in DLBCL is high. A preponderance of ACTB mutations was also noted toward the amino terminus of the protein, but the functional significance of this remains unknown.