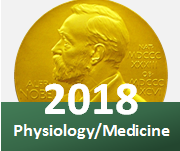 The 2018 Noble Prize in Physiology or Medicine was awarded on Monday, October 1st, 2018 to Tasuku Honjo of Japan and James P. Allison of the United States for discovering Immuno Oncology Checkpoint Proteins (I-O) that have fundamentally changed the way some cancers are treated. Unlike previous cancer therapies that target cancer cells directly, their discovery targets the “brakes” of the host immune system.


Role of accelerators and brakes in our immune system

Your immune system is capable of fighting against viruses, bacteria, parasites and even cancer cells. T cells are a type of white blood cell that play a key role in body’s immune system by discriminating “self” from “non-self” so invading bacteria and foreign substances can be attacked and eliminated. Each T cell expresses a unique antigen receptor which recognizes microorganism-derived peptides (referred to as antigens) presented on the cell surface of major histocompatibility complex (MHC) molecules. For example, during an infection, a unique protein from bacteria is presented on MHC molecule that can be recognized by T cells and can lead to immune cell activation. In order to only harm “non-self”, immune system has accelerators and brakes that strengthen or dampen the immune response, respectively. Accelerators are proteins that interact with proteins on MHC molecule, and this binding interaction only occurs when there are known foreign antigens. At the same time, there are proteins known as immune checkpoints that act to dampen T cell activity and inhibit attack on “self.” Programmed cell death protein 1 (PD-1) and cytotoxic T lymphocyte antigen 4 (CTLA-4) are two checkpoint proteins discovered by the above-mentioned noble laureates expressed on the surface of T-cells that act as brakes on the immune system.

Unlike recognizing bacteria, T cells have a hard time recognizing cancer cells as foreign invaders. Additionally cancer cells have developed ways to take advantage of checkpoint proteins to put brakes on T cell activity and reduce immune response. In patients with cancer, PD-1 and CTLA-4 pathways suppress the immune response and shut down anti-tumor immune activity. Allison and Honjo realized that by inhibiting these checkpoints, they can take advantage of the immune system to fight cancer.

In the early 1990s, Allison discovered the function of CTLA-4 as a checkpoint and later developed a monoclonal antibody that could inhibit CTLA-4 function. He found that CTLA-4 blockade frees the immune system to attack cancer. Similarly in 1992, Honjo discovered PD-1 as another checkpoint and showed PD-1 blockade is a promising strategy to fight against cancer in animal models. Allison and Honjo’s discovery led to a new class of drugs called immune checkpoint inhibitors. In 2012 the efficacy of this class of drugs began to be demonstrated in several patients with different types of cancer.

Currently there are four FDA approved checkpoint inhibitors: CTLA-4, PD-1 (Nivolumab), PD-1 (Pembrolizumab), and PD-L1. Origene offers a complete range of products such as cDNA clones, antibodies, proteins, lentiviral particles and gene expression products for your I-O research. Origene utilizes its proprietary UltraMAB and TrueRAB technologies to develop a range of anti-PD-L1 monoclonal antibodies, offering both specificity and sensitivity for your research. Find out more about these antibodies here.